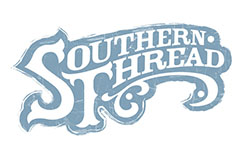 The Southern Thread brand was created in 2006, and hit the scene as the new not-so-western brand from MIL The ladies line launched into the market place in 2008 and carries the same inspirations and ideals of the men's line. The Southern Thread lines are inspired by the ideals and values of Independent music, most notably from the Red Dirt/Texas (RDTDC) music scene and by the latest in 'underground' fashion. Fiercely independent and loyal to the core, the Southern Thread brand is a western inspired brand with a rock 'n' roll edge. Part country and part rock 'n' roll combine to create stylish, understated clothing lines that says "cool" without saying a word. Using the inspiration, passion and motivations of these Independent music fans, the Southern Thread brand turns music into textile with fashionable and affordable clothing lines that they can call their own. Whether dressed up or dressed down, our customers wear Southern Thread clothing proudly because it shares the same ideals, values and love for the music that they do.